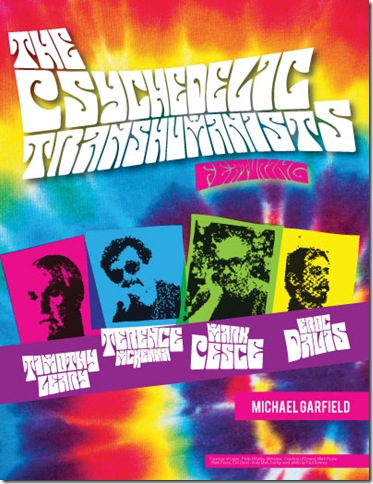 Transhumanism in a fortune cookie: the familiar human world is just one point along a continuum of evolution, and we have an unprecedented capacity to participate in that process. And yet, the future being as slippery as it is, there are as many visions for how this might occur as there are visionaries to guess at it. Computer scientists tend to have one transhumanism; genetic engineers, another. However, coherent themes emerge for those who have taken it upon themselves to make a sweeping survey of human inquiry, integrating a keen reading of the vectors of our technology with postmodern insight into the nature of mind. Some of these thinkers have been catalyzed by the psychedelic experience — in a way, the most informative window into a world beyond the human that we have yet discovered. They understand the message of psychedelics and the message of technology to converge on the horizon of a deeper reading of reality that recognizes mind and matter as dimensions of the same truth — a truth for which language has ill-prepared us.

Among the ranks of these “psychedelic transhumanists” are legendary rebels like Timothy Leary, wise fools like Terence McKenna, cultural commentators like Erik Davis and Mark Pesce and avantpsychopharmacologists like David Pearce. Hailing from disparate knowledge domains, they all share a hyperliterate intelligence that is, in its own way, rigorous. Their arguments are not necessarily subject to the conventional scientific method, but they are not so easily refuted. Their common vision shares much with the rest of the transhuman community, including an embrace of technology and science as both potent and inevitable; an evolutionary model of the universe and humanity; a sense of the human organism as something that can be tinkered with and expanded; a recognition of drugs as a technology that can dramatically reinvent identity, and a playful challenging of fixed boundaries. In many ways they demonstrate the seed of transhumanism in this moment by exemplifying self-revision and the reevaluation of assumptions as an open ended and ongoing process. And along the way, they tatter the mechanistic control fantasies we have held onto in spite of our most sophisticated inquiries.

Among these visionaries, we find a general agreement on the emergence of machine intelligence, but from a less dualistic perspective than most in the transhuman sphere — leaning towards a deeper and more balanced recognition of both inner and outer realities. They tend to critique philosophies that consider mind a mere epiphenomenon, or that fail to recognize the role of the speculator in speculation.

They see technology as ideas, and ideas as technology. They question our fanatical efforts at control via the runaway complexity of progress, and remind us of the stubborn persistence of the unconscious, the body and the other. They remind us to see the evolution of humanity and beyond as much in terms of qualia as quanta, and paint the future as more sensitive to psychological, spiritual, ethical, and biological concerns than those on the hardboiled tech edge.

The distinctions between this vision and the more common idea of a technological singularity are easily distilled. In their own words, presented as a “virtual conversation” of transcripts and correspondences, here are the core messages of a transhumanist vision informed by the psychedelic experience…

{READ THE FULL ARTICLE ON H+}

h+ Magazine Fall 2009, Page 50-56. You can download the electronic version or PDF from the h+ website, or wait until later this month and find it on newsstands.