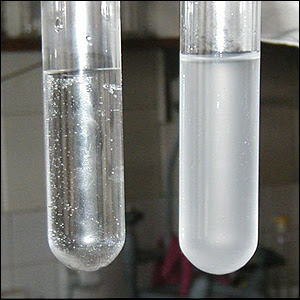 Does one of these test tubes hold a baby Universe?

A "universe in a test tube" that could be used to assess theories of everything has been created by physicists.

Time is running out - literally, say scientists
Are we missing a dimension of time?
Are dark forces at work in space?

The test tube, the size of a little finger, has been cooled to a fraction of a degree above the lowest possible temperature, absolute zero, which is just over 273 degrees below the freezing point of water. Inside the tube an isotope of helium (called helium three) forms a "superfluid", an ordered liquid where all the atoms are in the same state according to the theory that rules the subatomic domain, called quantum theory.

What is remarkable is that atoms in the liquid, at temperatures within a thousandth of a degree of absolute zero, form structures that, according to the team at Lancaster University, are similar those seen in the cosmos.

"In effect, we have made a universe in a test tube," says Richard Haley, who did the work with Prof George Pickett and other members of the "Ultra-low Temperature Group."

The Holy Grail of physics is to establish an overarching explanation to unite all the particles and forces of the cosmos. But one of the complaints commonly levelled at a leading contender for a "theory of everything", called string theory, is that it is impossible to test.

But now, according to the study in the journal Nature Physics, it may be possible using the universe in a test tube. "It was a serendipitous discovery," says Haley.

Read the complete article at: Telegraph.co.uk