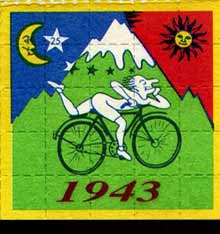 Nevertheless, in the spring of 1943, I repeated the synthesis of LSD-25. As in the first synthesis, this involved the production of only a few centigrams of the compound. In the final step of the synthesis, during the purification and crystallization of lysergic acid diethylamide in the form of a tartrate (tartaric acid salt), I was interrupted in my work by unusual sensations. The following description of this incident comes from the report that I sent at the time to Professor Stoll:

Last Friday, April 16, 1943 I was forced to interrupt my work in the laboratory in the middle of the afternoon and proceed home, being affected by a remarkable restlessness, combined with a slight dizziness. At home I lay down and sank into a not unpleasant intoxicated-like condition, characterized by an extremely stimulated imagination. In a dreamlike state, with eyes closed (I found the daylight to be unpleasantly glaring), I perceived an uninterrupted stream of fantastic pictures, extraordinary shapes with intense, kaleidoscopic play of colors. After some two hours this condition faded away.

This was, altogether, a remarkable experience—both in its sudden onset and its extraordinary course. It seemed to have resulted from some external toxic influence; I surmised a connection with the substance I had been working with at the time, lysergic acid diethylamide tartrate.

On April 19, 1943 Dr. Albert Hofmann intentionally ingested 250 µg of LSD, which he hypothesized would be at most a threshold level dose, based on his research on other ergot alkaloids. Surprisingly, the substance showed a potency orders of magnitude above almost any other substance known at the time, amounting to a much heavier dose than typically given in modern therapeutic use. After ingesting the substance Hofmann found himself struggling to speak intelligibly and asked his laboratory assistant, who knew of the self-experiment, to escort him home on his bicycle, since wartime restrictions made automobiles unavailable. On the bicycle ride home, Hofmann's condition became more severe and in his journal he stated that everything in his field of vision wavered and was distorted, as if seen in a curved mirror. Hofmann also stated that while riding on the bicycle, he had the sensation of being stationary, unable to move from where he was, despite the fact that he was moving very rapidly.

Once Hofmann arrived home, he summoned a doctor and asked his neighbor for milk, believing it might help relieve the symptoms. Hofmann wrote that despite his delirious and bewildered condition, he was able to choose milk as a nonspecific antidote for poisoning. Upon arriving the attending doctor could find no abnormal physical symptoms other than extremely dilated pupils. After spending several hours terrified that his body had been possessed by a demon, that his next door neighbor was a witch, and that his furniture was threatening him, Dr. Hofmann feared he had become completely insane. In his journal Hofmann said that the doctor saw no reason to prescribe medication and instead sent him to his bed. At this time Hofmann said that the feelings of fear had started to give way to feelings of good fortune and gratitude, and that he was now enjoying the colors and plays of shapes that persisted behind his closed eyes. Hofmann mentions seeing "fantastic images" surging past him, alternating and opening and closing themselves into circles and spirals and finally exploding into colored fountains and then rearranging themselves in a constant flux. Hofmann mentions that during the condition every acoustic perception, such as the sound of a passing automobile, was transformed into optical perceptions. Eventually Hofmann slept and upon awakening the next morning felt refreshed and clearheaded, though somewhat physically tired. He also stated that he had a sensation of well being and renewed life and that his breakfast tasted unusually delicious. Upon walking in his garden he remarked that all of his senses were "vibrating in a condition of highest sensitivity, which then persisted for the entire day".
Posted by EROCx1 at 4:20 PM