Albert Hofmann has passed on today... 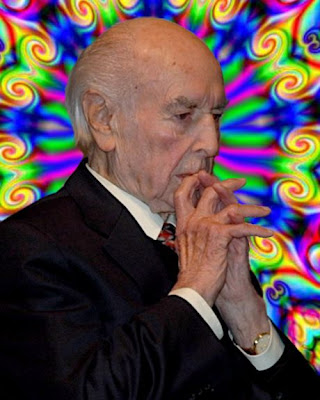 Albert Hofmann
The Father of LSD
11 January 1906 - 29 April 2008
Joined the ancestor spriits at 9AM CEST
at his home in Basel, Switzerland
Albert Hofmann, the father of LSD, passed on the the after life at 9:00AM Basel time on Tuesday April 29, 2008 at his home in Basel, Switzerland. Cause of death was a heart attack; two caretakers were there with him at the time.
Albert had been increasingly thinking of death these last few months. He had stopped leaving his home, where he said he could feel the spirit of Anita, his wife who died December 20, 2007. He didn't come to the World Psychedelic Forum a month ago, but did entertain some visitors at his home. MAPS President Rick Doblin said, "Albert and I spoke on the phone the day after the Basel conferenceand he was happy and fulfilled. He'd seen the renewal of LSD psychotherapy research with his own eyes, as had [his wife] Anita. I said that I looked forward to discussing the results of the study with him in about a year and a half and he laughed and said he'd try to help the research however he could, either from this side or "the other side".
Now it even more falls on younger generations to transform LSD into a legal medicine and beyond that into a tool for personal growth legally available to all.
"In death, I go back to where I came from,
To where I was before I was born, that’s all.”
Albert Hofmann
Earth will miss you Dr. Hofmann!
The New York Times obituary
Posted by EROCx1 at 9:00 AM