Psychedelic Salon Podcast 039 - Mind States Sound Bites and Lorenzo in Venice Beach includes a talk by Lorenzo at a salon in Venice Beach, California in 2003, where he recapitulates his "Living Under the Radar" and Homo divinus Mind States IV.
Direct MP3 Download 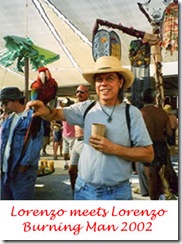 The stand-off at the Church of the Nativity in Bethlehem boggles the mind. News of this event reads like the work of some deranged writer of fiction. Even the most casual observer of this astonishing event must conclude that a significant part of the human family has gone mad.

Being social creatures, we humans organized governments to serve our collective needs on the material plane. We organized religions to guide us on our spiritual quests. Most of these collectives of human consciousness were founded upon lofty principles and beliefs, and for a while they served us well. Over time, however, these mega-human institutions took on a will of their own, and in the process they lost much of their original loving spirit. Short on empathy and love, several of these human-created group minds converged in Bethlehem. And so came to be the sad state of affairs where the holiest shrine in Christendom became a sanctuary for suspected Moslem terrorists fleeing from Zionist Jews who were trying to murder them under the banner of "self-defense." Such behavior is nothing short of insanity. Fortunately, all is not lost.

Like a climber on an infinitely high mountain, human consciousness relentlessly continues its ascent. Occasionally it reaches a broad ledge on which it can take a brief rest. And with each new ledge comes a better view where consciousness becomes more self-reflecting and expands its awareness of the world on which it is focused. The ledge we call Homo sapiens has been well worth the climb, for much has been learned here. However, as is obvious from the siege in Bethlehem, the day has arrived for human consciousness to once again begin its ascent. It is time to continue our evolution to yet a higher level of awareness.

As we look up, searching for our next hand-hold, we notice that something is different this time. Our climb, our evolution, is no longer shrouded in fog. From here we can continue in the bright light of the sun, for human consciousness has become a partner in the processes of evolution. No longer must we wait for some random mutation or cataclysmic event to trigger the birth of a new species. And so, almost imperceptibly, a new genus of humans has begun to evolve. Most people fail to recognize these new humans, for their physical make-up is much the same as their mother-species, Homo sapiens. But as scientists will tell you, biological changes are not the only determining factor in a speciation event. In fact, eating habits, mating habits, and other life-style factors are enough to distinguish one species of animal from another, even when their genetic make-up is identical.

As was the case some tens of thousands of years ago, when at least three different human species coexisted on Earth, more than one species of human is now inhabiting this planet. I call the new human species Homo divinus. If you look closely, you will find members of this new species everywhere. Perhaps you are one yourself, for now that consciousness has become evolution's willing partner, self-selection (the willed mutation from one species to another) has replaced chance as the best way to improve life on this planet.

The first phase in the evolution of Homo sapiens into Homo divinus may take place unconsciously. It might begin with a deepening love of nature and increased concern about its destruction. Or it could come about through an instant awakening to the fact that you are living an exceptionally privileged life. With this increased state of awareness comes a gradual shift in consciousness, which in turn brings about a change in lifestyle. Over time habits change, and new friends with similar states of consciousness and interests enter the picture. Then the day arrives on which you seemingly wake up in place and find yourself to be a stranger in a strange land.

This moment of awakening brings with it the last phase of your transformation, which comes under the guise of an intense inner quest for the spiritual essence of being. It is on this path that the final metamorphosis takes place because the search for spiritual identity ultimately leads to the only possible conclusion: You are divine. God is all, and you are a part of all that is. There are no boundaries, no dividing lines. There is only oneness, and that oneness is divine in nature.

At this moment of awareness the new human takes the final step in joining the species I call Homo divinus: You consciously decide to live the remainder of your life in harmony with your own divine nature. In an instant, you are no longer a member of the warring, polluting, selfish species we call Homo sapiens. And in that instant, all of the problems humans have created in this world become less of a burden to you. "Those problems were created by a less enlightened species," you think. "I must join together with others like me and teach the divine (but unaware) Homo sapiens how to evolve." While nothing may have changed in your physical world, at that instant, everything will have changed in your spiritual world.

Newly awakened members of the species Homo divinus are all around us, yet most remain virtually invisible. Often they are hesitant to reveal themselves for they sense they are in a hostile environment. At times they feel isolated and alone, even when in the company of family and friends. To Homo divinus, the insanity of a significant part of the species Homo sapiens is clearly apparent. To Homo divinus, whose consciousness has expanded far beyond their personal concerns, greed and war are inconceivable. A distinguishing trait of the new humans is that they understand, at the most fundamental level, how intimately everyone and everything is interconnected. And they are aware that they are not destined to be the supreme species on this planet. They see themselves as they truly are, an equal part of all life on Earth.

As members of this new species awaken in the light of their divine nature, they begin to look for others of their kind. Over the past two decades, small groups of these new humans have made contact with one another. Occasionally they unite at gatherings, both large and small, to celebrate the pure joy of being alive. Already there is at least one permanent community with hundreds of these advanced beings living together in harmony. While they may not have consciously named themselves Homo divinus, they are fully aware of what a precious gift it is to be human. Furthermore, they sense the responsibility that flows from such awareness.

The world as it has been for the past 2,000 years is about to come to an end. This does not mean that the flame of human consciousness is about to be snuffed out. The chaos in the world today comes not as a prelude to Armageddon, rather it is a reminder that we are in the process of giving birth to a new life-form. Big things are happening and even more significant events lie ahead. Everyone can feel it. Evolution is on the move once again and consciousness is reaching up for its next hand-hold.

The concept of Homo divinus is not a new idea. It is just an idea whose time has come. Now the choice is yours. Do you want to remain mired in the quicksand of Homo sapiens' history, or do you want to climb in the sun? If you like, you can remain a Homo sapiens. There is no natural law compelling you to see the world through the eyes of a new species. Self-selection means just what it says.

Should you choose to live as Homo divinus, however, it most certainly will give you the evolutionary advantage of living in harmony with the Earth and with other members of your species. You are divine, why not live that way?


"Homo divinus, An Evolutionary Advantage" Copyright © 2002 by Lawrence Hagerty
Verbatim copying and redistribution are permitted in any medium
provided this notice is preserved.