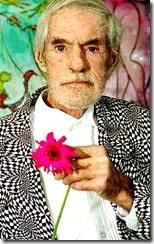 It is very exciting to see so much of Tim's archives finally becoming available for to the citizens of the online world to access. The fact that this archive even exists is a small miracle considering Tim's frequent moves and numerous arrests (40 on four continents), Dr. Leary managed to keep together practically all of his papers and recordings. It is good to know that it has been well preserved and that good people are working hard to digitize everything before the quality deteriorates or worse. A lesson learned from the tragic loss of the Terence McKenna archives.

I was incredibly disappointed how Dr. Leary's web site had disappeared from the net around 6 years ago (for reasons still not made very clear). At any rate the past is the past & what's important is that the archive has been progressively making its way online over a decade after Tim had passed away.

First were some great audio recordings by way of Bruce Damer & my friend Lorenzo via episodes of Psychedelic Salon podcasts. Lorenzo began sharing these talks about a year ago.

Around the same time, videos began appearing on the Internet Archive.

Next http://www.timothylearyarchives.org/ emerged onto the net and now seems to be running full speed.

Last but not least Leary.com changed from the single closed for renovation page (that appeared every time I was hoping to see it back online) to a unique full page video welcome screen. That so far I haven't been able to navigate past. I hope the sudden resurfacing of the archive is not only an only an attempt to sell it. But is a genuine effort to digitize and share the archive freely to anyone who seeks it as soon as possible.

Daniel Terdiman has written an excellent article on the Leary archive for CNET. Below is a small excerpt:

“Leary, as you probably know, was famous for his decades of experimental research into and promotion of the effects of hallucinogens, and over the years became as well known as many of the celebrity artists, writers, thinkers, and performers he hung out with.

Less well known, however, is that Leary, who died in 1996 of prostate cancer, became a serious techie in his later years. He put up a very early Web site, co-produced a late-’80s video game for Electronic Arts, worked on a series of the latest and greatest computers, and, it is said, updated his era-defining catchphrase for the digital age to reflect a newfound belief that computers were the LSD of the ’90s: “Turn on, boot up, and jack in.”

Today, addiction to technology is probably even more prevalent than devotion to drugs was in the ’60s, and most people probably can’t even imagine what the physical archives of someone like Leary would look like. After all, isn’t everything digitized and online these days?

On Thursday, however, I had the chance to spend some time with a small piece of Leary’s 400-carton-large archives–which is housed in a storage facility here–and I was in danger of getting seriously sucked in. In box after box, I found a true treasure trove of letters, photographs, posters and yes, computer equipment and discs.”

The entire article is available on CNET.

Last I heard, my friend Bruce Eisner was also planning on attending the celebration of Tim's life in San Francisco this past Sunday. I am looking forward to hearing about his visit. He has already made one post about the archive in his blog.