DMT receptor has been discovered 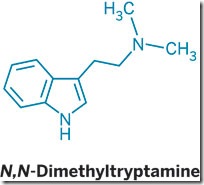 A hallucinogenic compound found in psychoactive snuffs and sacramental teas used in native shamanic rituals in South America has helped elucidate the role of a receptor found throughout the nervous system. The sigma-1 receptor was known to bind many synthetic compounds, and it was originally mischaracterized as a receptor for opioid drugs. But its real role in the body remains unknown. However, Arnold E. Ruoho of the University of Wisconsin, Madison, and colleagues have now solved one part of the mystery: They have discovered that the receptor's endogenous ligand is N,N-dimethyltryptamine (DMT) (Science 2009, 323, 934).

DMT is not only found in hallucinogenic teas and snuffs but is also produced by enzymes in the body. It's been detected in human urine, blood, and cerebrospinal fluid; in the mammalian lung; and in rodent brains. At least in rodents, DMT levels rise in stressful conditions. Ruoho's group found that DMT inhibits voltage-gated sodium ion channel activity when it binds to sigma-1 receptors on cells.

Thanks so much for this post, quite effective info.