The Shamanic Origins of Christmas

Well its that time of the year again. So I would like to share Dana Larsen's wonderful essay "Modern Christmas traditions are based on ancient mushroom-using shamans" as I do every Christmas. Just to help spread a little clarity, history and truth about this special season, its rituals and meaning that was hijacked by the Judeo-Christian religions long ago. Who have consequently lost it to our cultures new religion, Consumerism.

Modern Christmas traditions are based on ancient mushroom-using shamans. 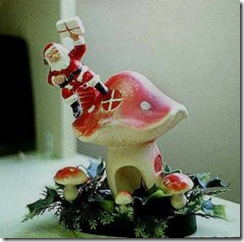 Best wishes for peace, happiness, good health and hopefully a little wealth this Winter Solstice, New Year and beyond!
-EROCx1
Posted by EROCx1 at 4:20 AM

That made for some fascinating reading, thanks for sharing. Does Dana Larsen have a website of her own?

Could have done with that about a week ago!

'Tis blessed to bestow, and yet,
Could we bestow the gifts we get,
And keep the ones we give away,
How happy were our Christmas day!
~Carolyn Wells
thanks nice comment!

Thanks for sharing the Shamanic Origins of Christmas. It was nice going through your blog. Have a wonderful Christmas.

Seems interesting, but nothing much, no reference as to where this guy got all his info, would have been interesting to go into details about this "pagan" tradition. The guy's website says nothing about his research either.

this is mostly conjecture and much as it's a nice read, it's completely unfounded! for instance, "getting pissed" has nothing to do with shamanistic rituals, or drinking recycled halucinogenic reindeer wee. To "piss" was not in common usage in any shamans language and is instead 19th century London slang for urine, (london in the early 19th century was not a hotbed of shamanism). Then it took on the derogatory meaning of weak alcoholic drink, and to drink plenty of this was to get "piss-ed". almost everything else in this essay can easily be researched and found to be misleading. however, that never stopped a good internet viral posting before!