The origin of the 60’s: Alan Watts & friends Houseboat Summit

This fascinating recording is of a meeting held in 1967 between Alan Watts, Timothy Leary, Allen Ginsberg and Gary Snyder planning & discussing the future of psychedelic culture. Its offers a very unique & insightful perspective on the creation of would later be known as the “60’s”. 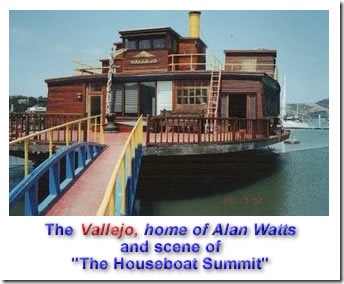 "The Houseboat Summit" was held in February 1967, and has been documented in several places on the Web. In addition to the quotes below, which are from this podcast, you can read a more complete transcript of this historic meeting here.

"I think that, thus far, the genius of this kind of underground that we’re talking about is that it has no leadership." -Alan Watts

"What we need to realize is that there can be, shall we say, a movement, a stirring among people, which can be organically designed instead of politically designed." -Alan Watts

"My historical reading of the situation is that these great monolithic empires developed, Rome, Turkey, and so forth, and they always break down when enough people, and it’s always the young, the creative, and minority groups drop out and go back to a tribal form." -Timothy Leary

"Our educational system in its entirety does nothing to give us any kind of material competence. In other words, we don’t learn how to cook, how to make clothes, how to build houses, how to make love, or to do any of the absolutely fundamental things of life." -Alan Watts

"That society is strong and viable which recognizes its own provisionality." -Alan Watts

"And so when the essential idea of love is lost there comes talk of fidelity. Actually, the only possible basis for two beings, male and female, to relate to each other is to grant each other total freedom." -Alan Watts

"Increasingly, we’re developing all kinds of systems for verifying reality by echoing it." -Alan Watts.

"What are we saying when we say now, something is holy? That means you should take a different attitude to what you are doing than if you were, for example, doing it for kicks." -Alan Watts

"Half the things I’ve done are wrong, mistakes [unintelligible]. The moratorium on pot and LSD a year ago is ridiculous. I shouldn’t have done that. I make a blunder at least one out of two times I come to bat." -Timothy Leary

"In other words, when there is a game going on that’s on a collision course, and that this game obviously is going to lead to total destruction, the only way of getting people out of a bad game is to indicate that the game is no longer interesting. See, we’ve left this game and it bores us." -Alan Watts, February 1967