The Hemperor has joined the Ancestor Spirits 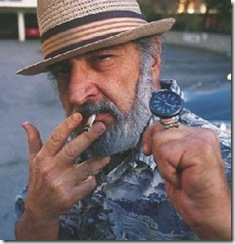 Our community has lost another Great Elder.

Read The Emperor Wears No Clothes

Jack Herer, much beloved Emperor of Hemp and marijuana hero. is dead at age 70. Herer was a tireless advocate in the battle to end marijuana prohibition. He was perhaps the world's most famous activist for the decriminalization of marijuana and the utilization of hemp.

Jack Herer was born June 18, 1939. A former Goldwater Republican, Herer became a political activist and the author of The Emperor Wears No Clothes, a book which is now a classic polemic in the effort to decriminalize marijuana.

Herer argued for the decriminalization and utilization of marijuana. Marijuana has been shown to be a renewable source of fuel, food, and medicine, and can be grown in virtually any part of the world. Herer was one of the first to show that the U.S. government deliberately hides the proof of marijuana's efficacy and utility. Herer devoted his life in support of cannabis, hemp and marijuana.

In later life Herer suffered several health problems. In 2000 Herer suffered a stroke and heart attack. After recovering the activist spoke with a stutter and walked with a limp. Last September 12 Herer collapsed backstage at "Hempstalk 2009" in Portland, Oregon.

After giving a fiery speech to the crowd on the future of hemp Herer suffered a heart attack and a significant loss of oxygen. Just minutes before his speech, Herer looked fit and said, "I'm getting better and better and better. I'm healthier than I've been..."

Herer passed away after months of serious health complications following his September collapse. Herer is a true American hero who spoke truth to power. He stood up for freedom while many others failed to do so. He was a good and noble man, and he will be missed.

Nice blog you got here... Just droppin' by to say hi! http://www.arts-and-entertainment.info

hi, you have nice blog.. u can view also mine..http://akoniwares.blogspot.com

Its a shame to see one of the great legalization leaders go.Jack Herer contributed alot to the movement.GuerillaGrowfare is my blog about cannabis