First I want to thank all of you for your friendship and support during the most challenging time of my life. It means a great deal to me and all the love really helped me immensely. Its been awhile since I have last written, this is due to my being hit by a tsunami of trouble & disaster. While this analogy may not be appropriate, its the best metaphor I could come up with. For those not familiar with my recent medical crisis, you can read about it in two blog entries: EROCx1 is very ill and My Road to Recovery. Since this has effected many of my readers (mostly friends. acquaintances and people I do business with) I wanted to bring that story to a close and update everyone here on where I stand today.

The definitive cause of my mental & medical break down was due to a bad doctor and horrific pharmaceutical interactions from medication prescribed to me together that should not be even be used with in 30 days of each other.  I had to get a new doctor due to my company changing insurance providers with out notice. My prior doctor successfully treated my back injury and managed my pain with 2 prescriptions. The new doctor wrote me 12 prescriptions in less then 2 months. On top of this he gave me a large quantity of samples which propitiated when my insurance originally denied one of them. These samples were not entered in to my medical records and when things got really bad he didn’t speak up on the true cause to protect himself from a Malpractice case. This resulted in many horrible side effects including making me delusional or more accurately described as temporarily insane. I was eventually hospitalized and it took 5 doctors, intensive testing and therapy to get almost back to normal. My new insurance did not cover ambulances, psychiatric medicine or therapy. Since my hospital stay was deemed to be the result of a “psychiatric” problem they are attempting to deny coverage for the ambulance, hospital, some doctors, psychiatrist, therapist + had high co-pays and uncovered medicines, the list goes on. I have an attorney, but due to the lack of accurate medical records it will probably come down to my word against the doctor and he did a good job of covering his ass so who knows how it will go. Once my attorney either gives up on or wins my case. I will be releasing individual & company names and do my best to warm the public of their unethical if not criminal behavior.

Given the severity of my condition and unknown diagnosis our former residence were renting out remained vacant because we could not rent or sell it. We also feared the chance that I would not recover enough to afford our current home and may need to move back, this left us paying mortgages and utilities on two properties. Not only was my health & wellbeing destroyed and my families financial stability was as well. I was unable to work my day job loosing 4 months pay and my store a neglected with orders backing up and inventory running out. Delays and bad feedback ruined my flawless reputation and I lost a large % of my customer base. Good friends [Especially James & Joe] came to the rescue and we were able to help ship everything out, handle correspondence and prevent a total collapse. Reflecting on friendship, during all the madness and chaos I also lost some close friends, Its my sincere hope that one day they will understand the nature of my illness, will accept my apologies and that we can one day be friends again.

I suffer from 3 month solid gap in my memory and was surprised to receive $1000’s of dollars in charge backs and nearly $4000 in combined over due invoices from my suppliers for material I have no evidence or recollection ordering or receiving. Even after a thorough accounting of inventory, emails, purchase orders & sales receipts. The only thing I can think of is some took advantage of my situation and its plausible that my packages arrived while I was hospitalized, in therapy or at a doctors visit which was typically 3-4 days per week and someone must have stolen the boxes which are often left on my doorstep when no one is home. Speaking of all the Dr’s visits and chaos I also rear ended another car while attempting to drive to a doctors appointment before I fully realized the severity of my condition.

Lets see, oh yes. During this period my domains expired causing me to loose all my correspondence, contacts, email and data + I had to buy one domain back for an excessive premium. Then my shopping cart facilitator "ecrater” banned and removed Salvia from my catalog with out notice. This led to one positive outcome, it forced me to complete a total revamp of Gaian Botanicals that was in the works for over a year, it is now on my own server which I thought made us independent from the prejudices demonstrated by ecrater. The new site is outstanding, an enormous improvement over the original version. Again, I couldn't have done with out help from my friends, especially Scott and feedback from customers willing to beta test the new site and point out errors and offered helpful suggestions.

Unfortunately the new site some how prompted an investigation by PayPal, the payment processor we used as a merchant account with out incident for several years. Who incorrectly claims Salvia divinorum is “illegal” (even though we always abide by the law and honor individual state regulations both publically and privately to be incompliance with all laws even if we don't agree with them) and/or is falsely considered “dangerous” and a violation of their acceptable use policy even if it is not specifically prohibited and the policy is incredibly vague, nor is their any evidence that Salvia is “dangerous". They “limited” my account which means I could NOT access my funds although they had no problem continuing to accept money for items they insist “pose a danger to the public”. Funny how that works. They gave me 5 days to remove all Salvia divinorum products (our best seller) from the new site we worked so hard on and forced me fill out an affidavit confessing that I am a naughty boy and will not break their unwritten rules again or else they will steal my money, close my account and report me to law enforcement agencies. Thus leaving no choice but to submit to their unjust demands or be completely shut down from accepting electronic payment. I am actively seeking a new merchant account / payment processor hoping to find one that is NOT prejudice against ALL of us. Sadly I am surprised to learn that many corporations have similar discriminatory policies. 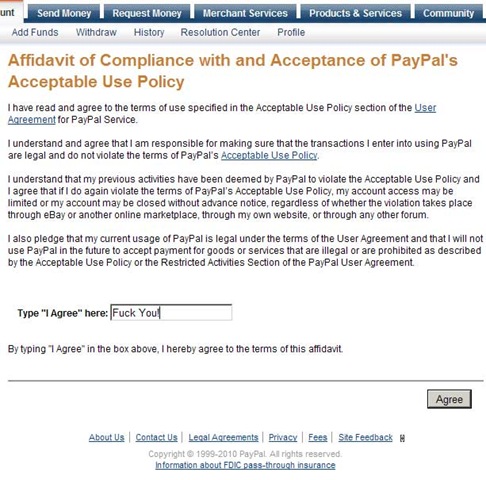 The Inquisition is alive today and is far more powerful then ever before. Its only evolved from straight out strong armed thievery & looting of immeasurable amounts of wealth and relics. Occupation of foreign nations, enslavement or genocide of entire populations, Holy wars, the practice of physically torturing people for confessions, burning at the stake and other methods of murder to “save souls”. It has secretly hidden behind public awareness controlling governments, corporations, banks, economies and of course still propagating propaganda, religious and racial wars among other crimes against humanity. The United States aka “Land of the Free”  holds the world record for incarcerating more of its own citizens per capita then any other nation on earth. This includes governments who take political & religious prisoners and maintains debtors prisons. They regularly confiscate (steal) good peoples hard earned money, property, children, marking them as un-employable, destroying lives and families all for the heresy of using your own mind & body as they wish and for exercising free will which can deem one guilty of committing a victimless “crime” which total insanity in the first place. Especially for those poor victims prosecuted for man made laws declaring pats of nature (or creation) illegal. At at rate I better stay on topic.

This pretty much concludes what I wanted to summarize and hopefully explains delays in the recent past, the temporary changes to my catalog and my lack of attention to EROCx1 BLOG, forums, correspondence and general involvement with the community I love. Rest assured any and all paid order will ship immediately and I will not rest until I correct this injustice. I will not let all these negative experiences get me down. Timothy Leary changed my life when I was younger telling me, “You determine the reality in which you inhabit. Do not be a victim of culture.” Thus I am viewing my recent struggles as a learning experience, as inspiration to grow, to force evolution to its fullest potential, a reminder of impermanence, to NOT take this wondrous life for granted and to cherish and love what is truly most important in life.

Again, I would like to thank those who stuck with me, helped me, saved me. Those who sent love, inspiration and even financial donations to get me to the here and now. I appreciate you and hope to have your continued friendship and support of Gaian Botanicals.

Namaste to you all!
EROCx1


While I have your attention. I am very excited to announce our new High Potency / Full Spectrum 50x Kratom Extract! This is the latest and most advanced high potency, full spectrum Kratom extract available anywhere. Its a great value given its effectiveness and the great expense to R&D and manufacturer it. I firmly believe it to be vastly superior to all other extracts in this price range. I couldn't be happier with it and this is just the first of many new products soon to be added to the Gaian Botanicals Catalog. 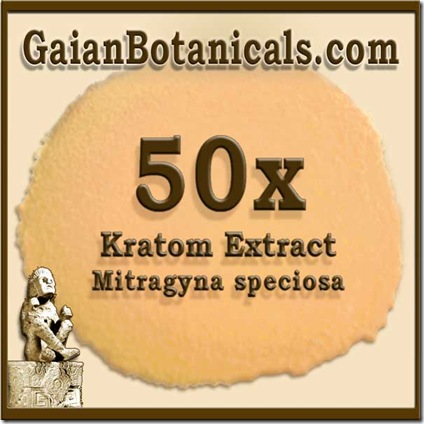