Clones are soon to be used in the war on drugs 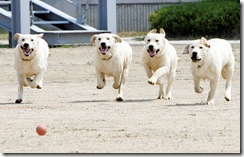 Four of the cloned dogs called Toppy during their exercise break at the Defector Dog Training Center in Incheon, west of Seoul. (Lee Jin-man/AP Photo)

For those not familiar with clones or clinging. It is the science of creating genetically identical copies of an organism by replicating its DNA sequences. There are various forms of cloning. However for the purposes of this entry, I am referring to reproductive cloning.

Cloning is one of the most advanced technological discoveries in the field of modern biology. While some what new to existing in reality. The concept is rather old. In fact when I first think of cloning, Huxley's 1932 novel Brave New World is the first example which comes to mind. Along with many other works of science fiction which have speculated at a future manipulated by cloning. Some feature films include Jurassic Park, Island of Dr. Moreau, Blade Runner, Star Wars, The Island and many others. This technology is now fact, not fiction.

Cloning has the potential to repair or replace damaged organs or tissue, defective genes, hearts, infertility and possibly even cure cancer.

To date fish, cats, dogs, cattle, goats, horses, pigs, rabbits, rats, monkeys, sheep and many other animals have all been successfully cloned. At least this is the list disclosed to the public. It is plausible that secret research is occurring in labs around the planet as I type this.

So considering all the previously mentioned potential medical benefits cloning may bring to mankind. What has science chosen to use this new cloning technology for in real life applications? My first impulse was to cure a disease? No, the latest cloning accomplishment is a new line of cloned drug sniffing Labrador retrievers. All of which have passed a behavior test to check if they are qualified to work as drug sniffing dogs. Typically only 10 to 15 percent of naturally born dogs pass the test.

"They have a superior nature. They are active and excel in accepting the training," said Kim Nak-seung, a trainer at the Korean Customs Service affiliated dog training center.

If the cloned dogs succeed in other tests for physical strength, concentration and sniffing ability, they will be put to work by July next year at airports and harbors across South Korea, according to the training center.

Why not bomb sniffing dogs? Wouldn't that be more beneficial line of work cloned super dogs? The same laboratory claims they could clone cancer-sniffing canines. Who knows, prior to being excepted to purchase life or health insurance. You may need to be screened by a clog first?

If Hitler had cloning technology, I'm sure he would have cloned dogs to sniff out "inferior races" of human beings to send them off to concentration camps. Maybe the war on drugs will really out do the goals of Nazi science and be the first to use cloned dogs (or cloned super soldiers) to send its "undesirable" citizens off to prisons. Of course this technology will not be limited to dogs, it will eventually be applied in new forms of eugenics. Are human beings with altered or missing receptor sites to far out of the realm of possibility?

I must confess I am NO expert on cloning. If there are any inaccuracies in this blog entry, please do let me know or correct me in the comments. I always welcome feed back in general as well.

Thanks for visiting!
E

More info can be read on National Geographic.