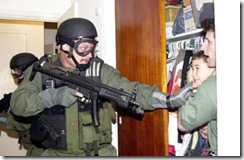 It's the day after Christmas in 2001. You're 21 years old. After finally putting your 18-month-old daughter to sleep, you're relaxing in your favorite recliner, nodding off in the flickering light of the television show you're only half-watching and the string of Christmas lights around your front window. When you hear the sounds of someone trying to kick in your door, you run to your daughter's bedroom; when someone does break in and kick down her bedroom door, you shoot. It turns out the man you shot is the (white) police chief's son, and as he dies of internal bleeding en route to the hospital you (a black man) are arrested, beaten so badly your bleed from your ear for a week, and are put on death row for five years (until a judge overturns what was a wrongful sentencing). The drugs the cops were looking for (using a warrant that named no one in your household) were never found. This is the case of Mississippian Corey Maye, who is still locked up.

Or: you are 57 years old, getting ready for work in mid-May 2003. It's shortly after six in the morning. A battering ram breaks down your door, and in gets tossed a flash grenade. You can't breathe, you're coughing, and the police don't believe you - they're looking for a stash of drugs and guns they'll never find. Taking no notice of your worsening condition, they handcuff you, and in little more than an hour, though you're finally on the way to the hospital, the heart attack caused by this traumatic violation takes your life. This was Alberta Spruill, a church volunteer and city worker in Harlem.

Or it's November 2006. You're a fierce 92-year-old woman, frightened by the sounds of someone prying off the burglar bars that cover your front door, but determined to protect your home: when your door is broken down you fire one shot at the intruders, before being shot 39 times, handcuffed and left to die while the police (who are the intruders, and as it turns out, have broken down the wrong door) realize their mistake and plant drugs in your basement. This was Kathryn Johnston of northwest Atlanta; two of the cops responsible for her death pled guilty to manslaughter last year, and a third was recently convicted of lying in the cover-up.

In December of 2006 police burn down the home of a 73-year-old man with Alzheimer's in Arizona. They launched a diversionary grenade through a bedroom window that started a fire that destroyed the entire house and all the families possessions. According to the search warrant they were looking for $7,000 in cash, electronics, weapons, a pit bull and rims from a Cadillac Escalade because a vehicle they believed to have been used in a robbery had this poor families address on its registration.

Imagine instead it's 2008. Coming home one night in late July, you find a large package which happens to contain marijuana. You are the mayor of a wealthy DC suburb and as it turns out, also victim to a drug smuggling scheme that targets innocent addresses in the UPS system. You bring the box inside - only to watch as moments later SWAT officers break in and shoot your two beautiful Labradors. As the dogs lay there dying, bleeding all over your nice floors, you are held in the very same room, handcuffed for hours. The law enforcement officials don't - at that time - actually believe that you are the mayor of this suburban town, and to date have yet to apologize for the killing of your family's pets.

No one is safe. Last month's case involving Berwyn Heights mayor Cheye Calvo is one of perhaps 40,000 (yes, forty thousand) such raids each year. (see Cato Institute report, Overkill: The Rise of Paramilitary Police Raids in America). What has made it so widely covered is simply the (white, class) privilege and power of the victims. Many, many lives are lost or ruined by these paramilitary operations. You're in extra danger if you happen to be poor and/or a person of color. Ellen blogged about these raids recently: check out her post and the Cato Institute's map of raid casualties.

This is not the world I want to live in. Take action now - check out our most recent action alert and encourage the U.S. Conference of Mayors to protect themselves and their cities from further unthinkable violence in what has honestly become a police state.