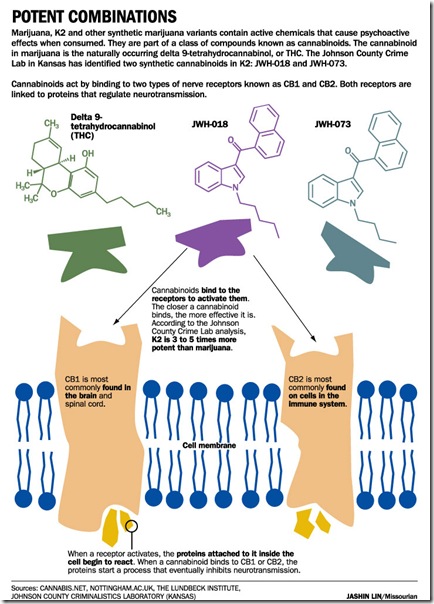 Marijuana, K2 and other synthetic marijuana variants contain active chemicals that cause psychoactive effects when consumed. They are part of a class of compounds known as cannabinoids. The cannabinoid in marijuana is the naturally occurring delta 9-tetrahydrocannabinol, or THC. The Johnson County Crime Lab in Kansas has identified two synthetic cannabinoids in K2: JWH-018 and JWH-073.

Cannabinoids act by binding to two types of nerve receptors known as CB1 and CB2. Both receptors are linked to proteins that regulate neurotransmission. ¦  Jashin Lin

COLUMBIA — A legal substance that mimics the effects of marijuana is responsible for some hospitalizations across the country but has not proven to be a significant presence in mid-Missouri.

K2, a substance that state Sen. Kurt Schaefer, R-Columbia, wants to ban in Missouri, is a “non-issue” in Columbia, said Jessie Haden, Columbia Police public information officer. The Columbia police have not received reports of incidents involving the legal substance.

K2 is a combination of plant materials and two synthetic cannabinoids, according to Jeremiah Morris, a forensic scientist for the Johnson County Criminalistics Laboratory in Mission, Kan. The laboratory, an arm of the Johnson County Sheriff's Department,  ran an analysis on K2 in October 2009 after noticing an increase in use in Johnson County.

“They found K2 to contain lab-produced drugs that act on the same part of the brain as marijuana,” Morris said.

But the compounds in K2 are three to five times more potent than THC found in marijuana. Morris compared the effects of K2's compounds to a lock-and-key mechanism in which the lock is a receptor site of the brain and the key is the drug's compounds. The "keys" in K2 compounds are keys that fit the brain's "lock" better than those in marijuana.

The psychoactive drug can cause users to experience rapidly increased heart rates, loss of consciousness, paranoia and, occasionally, psychotic episodes. One hospitalized user claimed he could see his heart beating out of his chest. Individuals have different reactions to the drug, though users do not have to smoke excessively to experience potentially harmful symptoms, Morris said.

K2 compounds were produced in a laboratory at Clemson University in 1995 by a group of research students working under professor John Huffman, who was trying to explore how drug substances latch on to receptor sites in the brain. Morris said he believes that manufacturers of K2 created and sold the substance for drug use by studying Huffman’s research, published in 1998.

Morris said there has been little scientific research exploring the toxicity of K2 in the United States, but hospitalization cases have appeared in Florida, Maine and Arkansas, in addition to St. Louis, Springfield and Kansas City.

Scientific studies on K2 compounds were done using a drug called Spice that emerged in Germany in 2008. It was made up of plant materials and the same compounds as K2 and caused psychotic episodes that resulted in increased hospitalizations and accidents, Morris said.

These studies showed that those who ingest K2 compounds exhibit typical drug dependency signs, withdrawal symptoms and addictive behaviors associated with other drug use. Morris said that K2 and Spice are basically the same product with different names.

Morris said that as people have begun to smoke K2 instead of marijuana, calls to poison control centers and emergency rooms have increased.

Though K2 has psychoactive properties, it is currently legal in Missouri and federally. Schaefer and other legislators hope to change this.

The House Public Safety Committee unanimously voted to pass a bill that, among other things, would make one of the ingredients in K2 illegal.

The bill's next step is passage by the House Rules Committee. It could then go to a vote of the whole body.

Kim Dude, assistant director of the MU Wellness Resource Center said the center has no plans to incorporate K2 into their educational programs until more information is found about the drug.

“The noise is from the media; it’s not from the students,” Dude said. “I think a lot of people are unaware.”

hey dear.. wud u mind if i'll say that plz leave some comments on any of my blog posts? not in the chatterbox.. but in the posts itself.. if u dont mind.. i need it for my grade. :) thanks a lot.. i'll be looking forward for your comment :)

and plus you're most welcome to be my follower. coz it wud give me extra points also.. hehe. but still ur choice.. :)

Ok, so a few kids got over anxious, and nouxious. Is this a reason to spend millions if government (oops our) money in new drug tests, police raids, education, hospital legal procedures, police dog training, court time....etc.etc..

We don't make spray paint illegal because students huff it? we just passed a law saying you have to be of age (hopefully old enough to know better).

At some point, we need to leave people to have some self responsibility!

i think k2 was terrible. it may be legal and weed isnt, but weed is natural and doesnt fuck your body up. i thought i was guna die on k2. when i smoke weed i feel great, im a stoner and i say k2 sucks

Effects of JWH-018 still vary between individuals. Usually, novice smokers may undergo a much more profound “high” experience compared to regulars. A few users may or may not show the same signs and symptoms, however they may experience the same effect of JWH-018 in general.

Generally speaking, JWH-018 and JWH-073 are super-potent THC. People who are novices or naive about using recreational drugs need to do their research and heed the warnings: THE DOSAGE MUST BE LOW OR YOU WILL HAVE A BAD AND VERY PANICKY TRIP.

I induced this in myself on purpose to see what it is like. Had I not been in a mindset where I knew that was going to happen to me, I might have rationalized it okay to call the Poison Control Center over something that faded away after about 30 min to 1 hour into a very nice high.

The overstimulation of CB1 and CB2 apparently cause hyper-anxiety effects. The key is to just graze them lightly and with love :)

holy crap, yeahh!!, i tripped sh*t on mr. nice guy and i was so scared cuz i thought i had testicular cancer wow and after about 45 min i checked again and i was aight haha, i smoked it while sh*tting so i guess thats why haha, love it though

Check out my blog.
http://davidaxelrod.wordpress.com/

Just ordered some free samples at

Anyone have suggestions on some of the new JWH compounds that aren't being banned?

If this country wasn't run buy businessman we wouldn't have to worry about man made, potentially harmful substances like these because the real thing would be legal!

If theres going to be over a million users than expect it. I need some been, HKchemCo was the only place i thought was good but there shold ba a cheaper site. Help any one?