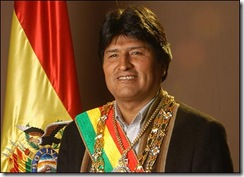 LA PAZ (AFP) — Bolivian leader Evo Morales on Thursday accused the US government of encouraging drug-trafficking as he explained his decision to banish the US Drug Enforcement Administration (DEA).

Morales, a staunch opponent of the Washington government, said the staff from the US agency had three months to prepare to leave the country, because "the DEA did not respect the police, or even the (Bolivian) armed forces."

"The worst thing is, it did not fight drug trafficking; It encouraged it," the Bolivian leader said, adding that he had "quite a bit of evidence" backing up his charges.

Presidential Minister Juan Ramon Quintana presented a series of documents and press clippings at a news conference, which he described as "object data" that had influenced Morales' decision to suspend DEA activities last week.

Quintana said Morales was ready to present the evidence to incoming US president Barack Obama "to prove the illegality, abuse and arrogance of the DEA in Bolivia."

Morales earlier Thursday said that after a 1986 operation in Huanchaca National Park, it was determined that the largest cocaine processing plant "was under DEA protection."

He also charged that the DEA had investigated political and union leaders opposed to neoliberal economic policies, which he said amounted to political persecution.

On Wednesday, he had accused the DEA of shooting and killing Bolivians during their anti-drug operations, including members of the coca farmers' movement.

Morales, Bolivia's first indigenous president, has served as the leader of the Bolivian coca-growers union. The coca plant, from which cocaine is derived, has many uses in traditional Andean culture.

The Bolivian leader announced last Saturday he was suspending the work of the DEA in the impoverished Andean nation, and accused it of having encouraged political unrest that killed 19 people in September.

"From today all the activities of the US DEA are suspended indefinitely," the Bolivian leader had said in the coca-growing region of Chimore, in the central province of Chapare, where he was evaluating efforts to combat drug trafficking.

The DEA has denied Morales' accusations.

US President George W. Bush, in a finding released in September, added Bolivia to a list of countries that have "failed demonstrably" in anti-drugs cooperation.

Retired-DEA agent Celerino Castillo exposes the atrocities and drug smuggling involvement of the US government.

If any of that's true, I bet no one will be held accountable. Good on him though; standing up for what he believes in!