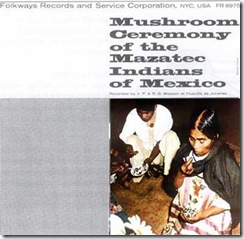 These Mp3 audio files were made from the nearly impossible to find "Mushroom Ceremony Of the Mazatec Indians Of Mexico" record. This recording was made by R. Gordon Wasson in 1956, in an attempt to chronicle a religious ceremony involving the investigation of psychedelic mushrooms by Indians who are attempting to communicate with the Divine Spirit. Lots of wild, hallucinatory chanting and the like, which might even appeal to fans of phonetic sound poems or dadaist utterings. Another unusual historical document that only Folkways would have released.

"Here is a shamanic performance complete. Gordon Wasson, a pioneer in the study of the role of mushrooms in religious ritual, gives us a transcription of an authentic "consultation" of the sacred mushroom, in sound. The occasion was the illness of a youth. The mushroom, through the mouth of Maria Sabina, a female shaman, decreed that the boy must die. He heard the bad news and died days later. Gordon Wasson taped the entire Velada. Wasson is able to prove that the words and undoubtedly the chant are pre-Cortes, going back for many centuries. Nothing like this record has been done for the new world; it is rivaled in the old world only by the Vedic chants of India".

Recorded by R. G. Wasson in Huautla de Jiménez, in the Mazatec Mountains in the northern corner of the State of Oaxaca, July 21, 1956.

awesome!
Thanks for this, had been search for a while.

file isn´t working anymore... could you fix it and/or send me a mail please?

thank you so much!
love

I'm sorry that the Internet Archive has chosen to remove this file. I am attempting to determine if it was some sort of copyright violation and if the file can be re-uploaded or hosted elsewhere.