I would like to share with you an excellent new Podcast hosted by Jan Irvin of Gnostic Media. Jan is one of the researchers and producers who brought us The Pharmacratic Inquisition and authors of AstroTheology & Shamanism. 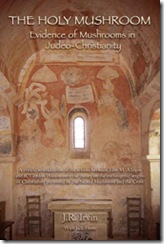 He is also the author of the recently released book:

The Holy Mushroom
Evidence of Mushrooms in Judeo-Christianity:
A critical re-evaluation of the schism between John M. Allegro and R. Gordon Wasson over the theory on the entheogenic origins of Christianity presented in The Sacred Mushroom and the Cross.

Episode #001 is a recording he did back in April of this year, 2008. He went with Richard Andrew Grove of 8thestate media and Paul Verge of Divergent Films to the home of pioneering entheogenic researcher, Professor Carl A. P. Ruck of Boston University. Professor Ruck co-authored Persephone’s Quest with Gordon Wasson, he also co-authored Apples of Apollo with Clark Heinrich and Dr. Blaise Staples. He’s the author of the book Sacred Mushrooms of the Goddess, Secrets of Eleusis, and more recently he co-authored The Hidden World, Survival of Pagan Shamanic Themes in European Fairytales. This episode features the entheogenic rites of the Eleusinian mysteries, John Marco Allegro’s research in The Sacred Mushroom and the Cross, and Ruck’s upcoming books.

Episode #002 features an interview Professor John Rush regarding his new book Failed God: Fractured Myth in a Fragile World. This is the first academic book since the publication of John Allegro’s The Sacred Mushroom and the Cross (1970) that argues Allegro was correct - and provides ample support for the mushroom foundations of Judeo-Christianity.

Episode #003 features an interview with my friend & author Dr. Martin Ball, host of the Entheogenic Evolution podcast series. They discuss the spiritual use of entheogens, especially mushrooms and Salvia Divinorum, as well as religious vs. spiritual freedom. Do you think you have religious freedom?