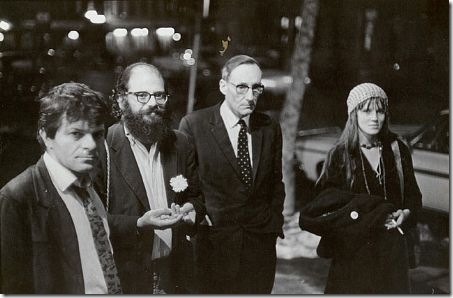 From: The Psychedelic Salon

PROGRAM NOTES:
"There are no bad drugs. There are simply people who don’t know how to use them. Intelligent people use drugs intelligently, and stupid people are going to abuse drugs the way they abuse everything else. And our function is to raise the level of intelligence. We have to have a program of drug education." –Timothy Leary

"I don’t think there’s any problem with advancing consciousness and becoming more and more aware of the struggle, not with the world, not to convince other people to do anything. The really interesting think is the struggle with the self, and the relation with the self, and there is no end to the improvement that can be done there, the discoveries that can be made." –Allen Ginsberg

[NOTE: The following quotes are all by Terence McKenna.]

"To contact the cosmic giggle, to have the flow of casuistry begin to give off synchronistic ripples, whitecaps in the billows of the coincidental ether, if you will. To achieve that, a precondition is a kind of unconsciousness, a kind of drifting, a certain taking-your-eye-off-the-ball, a certain assumptions that things are simpler than they are, almost always precedes what Mircea Eliade called ‘the rupture of plane’ that indicates that there is an archetypal world, an archetypal power behind profane appearances." –Terence McKenna

"It occurs to me that at any given moment, because of the way the planet is as a thing, some percentage of human beings are asleep, always, and many are awake. And so if the world soul is made of the collective consciousness of human beings, then it is never entirely awake. It is never entirely asleep. It exists in some kind of indeterminate zone."

"Technology, or the historical momentum of things, is creating such a bewildering social milieu that the monkey-mind cannot find a simple story, a simple creation myth, or redemption myth, to lay over the crazy, contradictory patchwork of profane techno-consumerist, post McLuanist, electronic, pre-apocalyptic existence."

"I believe that the truth of the matter is far more terrifying [than conspiracy theories]. The real truth that dare not speak itself is that no one is in control. Absolutely no one!"

"The global destiny of the [human] species is somehow unfolding with the logic of a dream."

"The carrier of the field of the cosmic giggle in most people’s lives is love. Love is some kind of output which messes with the entropic tendency toward probabilistic behavior in Nature."

"The primary contribution of 20th century thinking, if you will, is to have understood, finally, that information is primary. That this world, this cosmos, this universe, this body and soul are all made of information. … The implication for the digerati is that reality can therefore be hacked."

why isn't di Prima's name listed in your title? you put everyone else ion there and then show a picture with a woman who is not in your title. why??

Thanks for the writing Q,

I did not intentionally exclude di Prima. Lorenzo had a (?) next to her name and I wanted to confirm the spelling and got side tracked. She has been added.

RE: The picture. It was best photo I had which showed most of the panel. Dr. Leary is missing too.